The British Generals are often criticised for the choice of strategy and tactics for the Somme. The immense logistical challenges created by the choice of battlefield are rarely mentioned, yet they stretched the British Army to the full.

The worst possible battlefield from a supply viewpoint

The Somme was selected for the combined Allied attack by French Commander in Chief General Joffre, largely for political purposes (see the political and strategic decisions that led to Somme). For the British, it would mean bringing into the area, and then continuing to supply, some 400,000 men and 100,000 horses and all the necessary equipment, munitions rations and suuplies. For doing so, Joffre could not have chosen a worse place. Every sector behind the British held line between Arras and Ypres was more suitable. Naturally, existing French army and civilian facilities would be used wherever possible, but this had been a quiet front and had not been geared up to support such an effort. Prodigious efforts would have to be made, in a short timescale and with precious few reserves available to make them. These needs placed enormous demand on British manpower and all too often they could only be supplied by using units that were supposed to be training, or at rest..

In 1914-1918, everything moved on railways. This was the primary method for getting men and material from the ports on the Channel coast to the fighting front. It was reckoned that Fourth Army would when in action need 70 complete supply trains per day, and Third Army (only part of which was to be involved) another 58 per day, for an offensive on the Somme. Only two railway lines approached the front, both running into the town of Albert. In particular, the lateral (north-south) communication behind the battle front was very poor and was already very busy carrying traffic taking coal from Artois to Paris and the south of France. The two routes in were Doullens>Acheux>Albert and Amiens>Albert. The line running from Albert to Arras was not useable as it ran across no man’s land and into German hands in the Ancre valley. 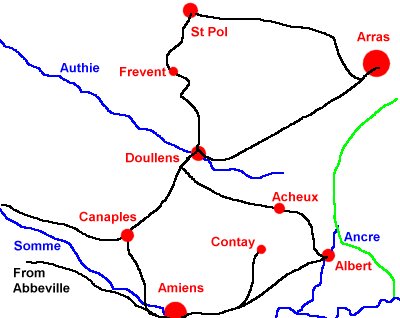 Map of the railways supplying the Somme area, before the battle. The green line marks the approximate position of the front line

The British Army has to expand the railway system

It was decided on 1 April 1916 that a new standard gauge line would be needed, running 17 miles between Candas and Acheux. This would provide another four or five supply railheads, but would have a maximum capacity of 15 trains per day. A second new line, giving three more railheads, was built on the 10-mile stretch from Daours to Contay, and a spur running from Dernancourt was extended to supply the artillery positions near Meaulte. It was eventually extended further, forming “The Loop” east of the Fricourt to Bray-sur-Somme road. Many other sidings, depots, platforms etc were also built, notably at Vignacourt, Flesselles and Buire. In all, 55 miles of new railway track had to be laid. And with the Labour Corps not yet in existeence much of the work fell on the infantry.

The rail supply routes to the Somme

Once these extensions were ready, supply trains ran to railheads at Acheux, Belle Eglise, Vignacourt, Frechencourt, Heilly, and Mericourt. (Corbie was also treated as railhead but the supplies came up by river).

An existing light railway running between Acheux and Albert was also used. Spurs of this ran through Martinsart to Aveluy and Thiepval Woods, and another on to Authuille. But the day of the light track railway as an important component of the logistical system had not yet come. An unidentified cemetery outside Dernancourt. Note railway tracks, probably part of the Albert-Amiens railway, running across the background. Sheet 62D northeast, taken from map reference E. 14. c. 85. 25. (Photo courtesy of the Australian War memorial, with thanks. Negative reference E 05566). The photo is believed to have been taken in 1918.

Roads to and in the Somme battlefield

Being a quiet agricultural area, the roads of the Somme were in no way suitable for sustained heavy mechanical loads. As there was no local stone suitable for road building, every ton had to be brought from other areas of France and even from Cornwall and Jersey. The supply of manpower and road stone barely kept up, and the condition of the roads even before the offensive began was giving great cause for concern. The plan to create forward dumps of stone could never be implemented due to shortages. Once the weather turned wet, the roads became almost impassable bogs.

Men and horses needed a supply of clean water. Other than the Rivers Somme and Ancre, and a small stream between Vadencourt and Contay, there was no surface water near or on the battlefield, and none within the range planned for an advance. Many bore-holes had to be sunk and miles of pipeline and pumps laid. Water refilling points were established at various points, from which the water tank wagons of each Division would supply the forward troops. Water for washing was a bare minimum.

Behind the lines, tens of thousands of tents and huts had to be provided and erected. The capacity provided was for “close billeting”; that is, providing a 6 by 2 feet space for each man. Every village between the front and Amiens became packed with troops.

The supply of materials

A large number of artillery ammunition dumps had to be created. The largest were at or near the railheads, where boxed ammunition was offloaded from the incoming trains. Here the ammunition passed from Lines of Communication (GHQ) “ownership” to that of the Army. Dumps were in the open. “Corduroy Roads” made of timber were laid to allow the horsed transport to access the dumps. 7 trains per day brought in the artillery ammunition, and from 20 June 1916, this went up to 10 trains. Ammunition train railheads were at Gezaincourt, Puchevillers, Contay, Corbie and Flesselles. A total of eight days rations were accumulated between the Divisional dumps and the forward troops, and maintained at that level. Each Division created a number of forward dumps for bombs, small arms ammunition and the 1001 other supplies needed to maintain troops in the battle.

For a general introduction to how the evacuation and treatment of a casualty was conducted, including a complete list of all medical facilities, click here.

Behind the planned battle front, the Royal Army Medical Corps formed eight groups, each of two Casualty Clearing Stations. These were tented, although a few huts were eventually provided. The purpose of the CCS was to treat casualties sufficiently only to send them on to the rear. They were generally located next to railway lines, where ambulance trains took the casualties to the hospitals near the coast. There were 18 permanent ambulance trains, supplemented by 15 more for the battle. Men arrived at the CCS from the battlefield either on foot, by truck or horse wagon. The CCSs were grouped at Heilly, Corbie, Contay, Puchevillers, Vecquemont, Doullens (2 groups) and Warlincourt. There was a single CCS each at Gezaincourt, Beauval, St Ouen and Amiens. In addition, there were established advanced operating centres for urgent cases, at Warloy and Authie.

Civilians in the battle area

It seems extraordinary that after almost two years of war, civilians were still living in close proximity to the firing lines. A “forward examining line” was fixed and inhabitants living east of it were warned through the village mayors that if they wished to leave their homes they must do so within 48 hours of the beginning of the bombardment and move only by daylight. To stay they must provide themselves with 10 days food supply. If after this date they wished to leave they would not be permitted to use any transport as the roads would be full. After the second day of bombardment, they could not leave.

This site has always been free to use but it does cost money to operate. If you find it a valuable resource, please consider becoming a supporter. By doing so, you will enable it to remain free to all. Click the Patreon link ...

The Long, Long Trail does not have its own social media accounts, but you would be welcome to follow my own at Twitter @1418research. Beware: it does include comments that are on other subjects!